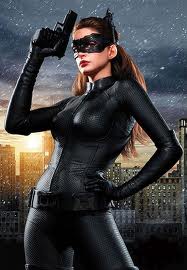 Women are commonly considered the most attractive when pretty, soft and have a sweet disposition. But there are some women whose sex appeal gets turned up when they take a walk on the dark side and  know how to kick a few asses.

Anne Hathaway’s performance as Catwoman was much better than I had originally expected. She is sultry, mischievous and . . .very flexible. Her creative uses for her metal high heels (Which I'd love a pair of!!!) is enough to get anyone’s blood boiling. I don’t know too many people who wouldn’t like their wrist being held to the wall by her tight-leather covered leg. There is nothing more impressive than seeing Hathaway in a maid’s costume sneak out of Bruce Wayne’s house by back-flipping out of the window. Not only is the audience attracted to the slender feline-looking Hathaway, they envy her. Who wouldn’t want to be able to slide in and out of rich homes stealing a few jewels and disappear into the night? Well, not me, I don't want to steal anything, but you get my point.

She is not just something sexy to look at. When confronted by a gang of rival criminals she is able to fight them off. She tricks her enemies and policemen alike with both physical aggression and mind tricks. Her duplicity was a nice surprise as I had trouble seeing the quirky Mia Thermopolis as the bodysuit-toting criminal. But Hathaway pulled it off remarkably making Catwoman intriguing, sexy and worthy of my girl crushes list!!! 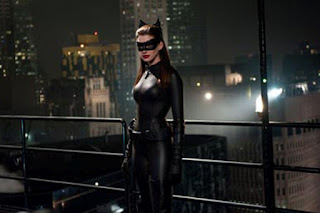 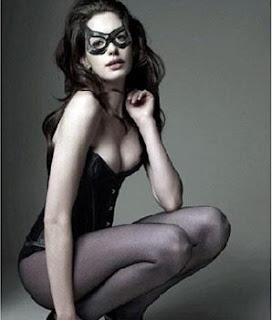 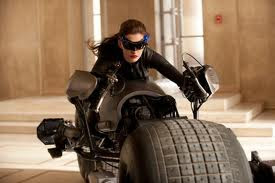