by Jamie
This Friday my Hubby and I will be celebrating our 5th wedding anniversary. I thought it would be fun to spend the week focused on all the special memories and moments that have made our time together (Actually 10 years overall.) so special. Today it seems appropriate to take you back to the beginning. . .our first date.

Hubby and I met at work. We worked in different departments, so it was "legal" to date each other per company policy. The funniest part of our relationship is that when he first saw me, he thought I looked like a snob. Can you even believe that? How dare he!

I started working at this company in January, by February I knew that he had a girlfriend. I had very sneakily (or so I thought) asked him,

"So do you have a valentine?"

When he answered yes I was heartbroken, but didn't want him to know that. I quickly came up with a reply,

I soooo lied, but I wanted to see if there was any disappointment on his face.

After Valentine's Day had come and gone, I asked him how his went. Turns out he broke up with his girlfriend. As I quietly did the dance of joy in my head, I was as sympathetic as I could be about his breakup. He didn't seem really heartbroken at all, and even more interested in me (I had to come up with a dumped fake boyfriend story and fast LOL).

After a few months of "randomly" stopping by each others desk throughout the day, cute emails back and forth and both ending up on the company softball team (He as a player and me as the team's scorekeeper.), he got up enough courage to ask me out. 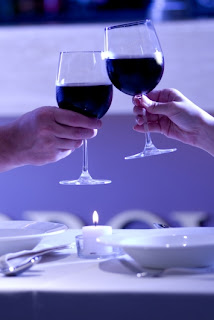 We went to Grady's American Grill for dinner and had a lovely dinner. We sat for hours having the "getting to know you" chat. The whole dinner he was so attentive to everything I said. I couldn't keep my eyes off of his amazing smile. I remember thinking to myself how easy he was to talk to. I felt like I had known him for years.

At the end of the dinner he excused himself to go to the restroom before we left. He had already paid for the bill, which I was very curious as to how much this had cost us. We both had fairly expensive dinners, wine and dessert. While he was gone our waitress brought back our receipt. I had to take a peak (I know I'm bad.). It was over $100 dollars!!! Yikes.

When he came back, since it was late and we had work the next day, the plan was to head home. Since I don't drive, he was driving. We get into the van and instead of heading towards my apartment, we start heading towards what I like to call the "ritzy" part of Tampa.

We spent the next few hours leisurely driving up and down the brick paved streets looking at multi-million dollar houses. I noticed something about the conversation when we were pointing out things we liked about this house or that house. We would say things like,

"We could have a place like that," or "Wouldn't you just love to have a wrap-around porch like that?"

Everything we mentioned was as if we were planning our future together. Who knew, that is exactly what we were doing.


What about you guys? What did you do on your first date with your main squeeze (or past boyfriends/girlfriends)? I'd love to hear...
Email ThisBlogThis!Share to TwitterShare to FacebookShare to Pinterest