From Where I Sit: Acceptance 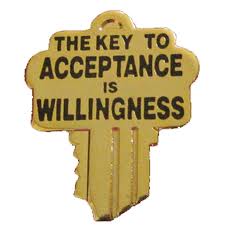 Once again, while watching Glee this past Tues I was struck with the urge to cheer Artie on in his fight against stereotyping those with disabilities when it comes to dating.

If you didn't see this episode or are not a Glee fan, here's the skinny of it. Becky is a fellow student at McKinley who has Down Syndrome. After hilariously dismissing the other boys, Becky chose Artie as the target of her affection. Was it because he is disabled as well? I don't know, but my thoughts are that perhaps she felt he would be more likely to give her a chance because he was. He had just been talked down to by Sugar Motta for being disabled, a theme that would play out in two of the week's main story lines.

Artie didn't know how to handle Becky's new-found interest in him, and he agreed to go to dinner with her for a presumably innocent "date." The two hit it off as friends, but Artie never had any intention of continuing down the romantic and sexual road Becky had planned. He realized this too late when Becky expressed her interest via sexy text photo, and it took a talk from Sue to set him straight. He eventually told Becky his true feelings, and despite her cool exterior, Dame Helen (her inner voice) revealed the tragedy inside; that once again she felt her having Down Syndrome was keeping her from love.

I know I have touched on my dating history in an earlier version of From Where I Sit, but I didn't really delve too much into the concept of acceptance and my perception of it in a romantic relationship.

I am a firm believer that the way you perceive yourself is the way the world will see you too. For example, if I went around with my head hanging down with my eyes to the floor the world would perceive that I was not comfortable with who I am, physically challenged or not. Now, if I went around with my head held high, smiling and making eye contact with people, the perception completely changes. . .wheelchair or not.

Wouldn't you agree that it is safe to say that we all easily make assumptions as to why the person of our romantic interests doesn't reciprocate our feelings? We quickly go to those attributes about ourselves that we are self conscious about. "He must not like girls that wear glasses," or "He must not like me because I'm too fat." The list is endless of excuses we come up with.

How easy would it be for me to immediately go to the assumption that, he must not like me because I'm in a wheelchair? EXTREMELY easy.

I am about to be really, REALLY real with you. I don't know if back in the day when I was single if I would have dated another person in a wheelchair. Not because I have anything against people in wheelchairs (Hello, how crazy would that be?), but I think looking at the big picture and future, how would that work? My hubby helps me with things on a daily basis that I cannot do. How would another wheelchair user help me? Granted, if I had fallen in love with someone who was in a wheelchair, we'd just have to work it out.

Here is where I would say that I don't care that I'm in a wheelchair and you shouldn't either if you want to be with me!!! Fact of the matter is, I could be any one of you out there. Every single person that stumbles upon this blog post could be in my shoes at any given moment. Accidents happen. I pray that it doesn't, but you could be me. And what if you were? You wouldn't want people to treat you any differently right?

I hate to say it, but I think sometimes those with disabilities focus on the fact that they are different and will hold that against others if the romance they are hoping for doesn't happen. I've seen it happen again and again where hearts are broken and the assumption becomes that because they are disabled that is why things didn't work out.

I will tell you this; I am not and never have been that girl. The one that holds her disability over someones head for not being interested in me back. I have liked my share of men, and some relationships worked out and some didn't, but the best one stuck!

What I think people need to remember is that we all want to be accepted and treated with respect, romantically or otherwise, disabled or not. The key to acceptance is the willingness to have an open mind and an open heart.
Email ThisBlogThis!Share to TwitterShare to FacebookShare to Pinterest