by Jamie
My husband and I have much in common when it comes to music, especially our love for big band and jazz style music. One of our favorite performers is the multi-talented musician and actor, Harry Connick Jr. In our 10 years together, we have seen Harry in concert a number of times; each performance leaving us awestruck by the talent on the stage.

His most recent performance in February of 2010 however would certainly be the most memorable for us both. We had purchased our tickets within minutes of them being available for order and with that excitement I had an idea. You see, I work in PR for a local children's hospital. What if I could reach out to Harry's PR person to see about his visiting our patients?  I would be lying if I said this quest was solely with the betterment of our patients in mind.
In a matter of minutes searching online, I was able to locate his managing company and without hesitation I put in my request. Hopeful that I would receive a response, but not counting on the acceptance of the invitation I waited. The next morning I had a reply from his manager, "Mr. Connick would be delighted to come to the hospital to visit the patients. As his schedule becomes clearer we will be in touch to work out the details." Was I reading that correctly? Harry Connick Jr. was going to be coming to the hospital? This was a dream come true!
As the date of the concert approached I was in close contact with his manager. Everything seemed to be a go. Then the bad news struck. The day before the concert I received a call stating that Harry was sick. The concert was still a go for the next day; however, he would not be able to visit the hospital. As much of a let down as it was, I knew we were still going to be seeing him in concert the next night. "We feel really bad to have to cancel on such short notice. I know that you and your husband are going to the concert tomorrow night. I'd like to put you both on the VIP list to get to go backstage to meet Harry after the show." OH MY GOD!!!! Was this really happening? I gladly accepted and couldn't wait to call my husband with the news.
At the concert we nervously went to the ticket office to pick up our back stage passes. What if there was a mistake? What if our names were not on the list? When it was our turn in line we told the clerk our names and that we were there to pick up our VIP passes. Without hesitation she handed them over. I think we both felt like Charlie with his golden ticket from Willy Wonka!
The show was AMAZING as it always is. Harry performed songs from his newest album, told jokes (He is so funny), danced and played a number of different instruments. My husband and I sat hand in hand, enjoying the talents of Harry and his band.
After the show had ended and the lights came up in the theater we were instructed to put on the VIP sticker and head to a door that led to the backstage area. Butterflies were in both of our stomachs. I remember saying to my husband, "OK, I'm not going to act all star struck or like a crazed fan. I'm going to call him Mr. Connick."  We were in a line of fifty people or so. As we inched closer to the greeting room we both kept commenting on how surreal this experience was. We had seen him in concert so many times, watched him in different movies and on different TV shows and now we were going to be face to face with him.
It was finally our turn to meet Harry. He had changed from the suit he had been wearing to a track suit and baseball hat. As we approached he had a huge smile on his face as he said hello. My initial plan of saying, "Hello Mr. Connick" went right out the window; "HI HARRY!" in a high pitched squeal of excitement is what came out.
The three of us talked for a few minutes like we were old friends. Working in PR, I have met a handful of celebrities and hands down Harry Connick Jr. was the most down to earth, friendly and welcoming that I have met. He asked us if we wanted to take a picture, which of course we both said yes. 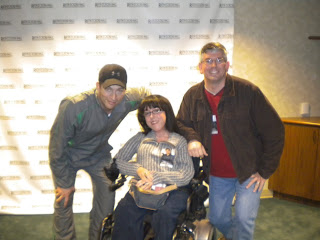 We left that night with memories that will last us a lifetime, a picture with one of our favorite artists and best of all, bragging rights to our friends and family.
Email ThisBlogThis!Share to TwitterShare to FacebookShare to Pinterest